My story about floating down the Canal du Midi in the south of France appears in No Set Boundaries: Eleven Stories of Life, Travel, Misadventure, the second volume of essays from Townsend 11, a publishing entity created by my long-term writers group. Get it wherever good e-books are sold, or download it to read on your computer or phone. Read my introduction to the book. 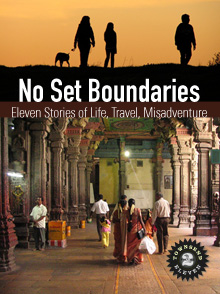 Here’s the lead to my story:

A Trickle of Time and Water

The church steeple in the village of Montesquieu-Lauragais in the Haute Garonne of France’s Midi-Pyrénées has stood for hundreds of years. From its perch above the gently recumbent wheat and sunflower fields caressing the Canal du Midi, it has seen scourges, sieges, and the everyday life of countless generations. But tonight it looked as if it was finally coming down.

Smoke wafted out of the belfry. Fire within threw a red glow on the stone tower. Sparks spurted into the air and fell toward the crowd below. A series of explosions erupted in the sky to the oohs and oh la las of the throng. But no, the church wasn’t burning down, these were feu d’artifice—fireworks. The fete was on.

Moments later, the lights came up in the plaza and a band began to play French popular standards from the ’30s and ’40s. The “dance floor” filled with couples in their 80s, 70s, 60s, while the young stood back in the comfort of their peers, and the younger still rode a mini-carousel of cars or “fished” for plastic ducks or lit up at the sight of cotton candy swirls larger than their heads.

“These are the men who fought my war,” said 84-year-old Ethel, one of my four companions, nodding toward the dancers. Her war, of course, was World War II, the war that Europeans hoped would be their last after centuries of conflict and bloodshed.

To read the rest, and ten other great stories, pick up a copy of No Set Boundaries.

Larry Habegger is a travel writer, editor, journalist, and teacher who has been covering the world since his international travels began in the 1970s. As a freelance writer for more than 30 years and syndicated columnist since 1985, his work has appeared in many major newspapers and magazines, including the Los Angeles Times, Chicago Tribune, Travel & Leisure, and Outside. In 1993 he cofounded the award-winning Travelers' Tales books with James and Tim O'Reilly and is currently executive editor. Larry is an inspiring writing teacher and coach, emphasizing the craft and art of the personal travel story. He is an experienced radio guest and public speaker on the subject of travel writing, and he regularly teaches at writing conferences. He is also editor-in-chief of Triporati.com, blogger for Cleared for Takeoff - The Triporati Blog, and a founder of The Prose Doctors, an editors' consortium. He lives with his family on Telegraph Hill in San Francisco. Contact Larry: larry@LarryHabegger.com
View all posts by Larry Habegger →